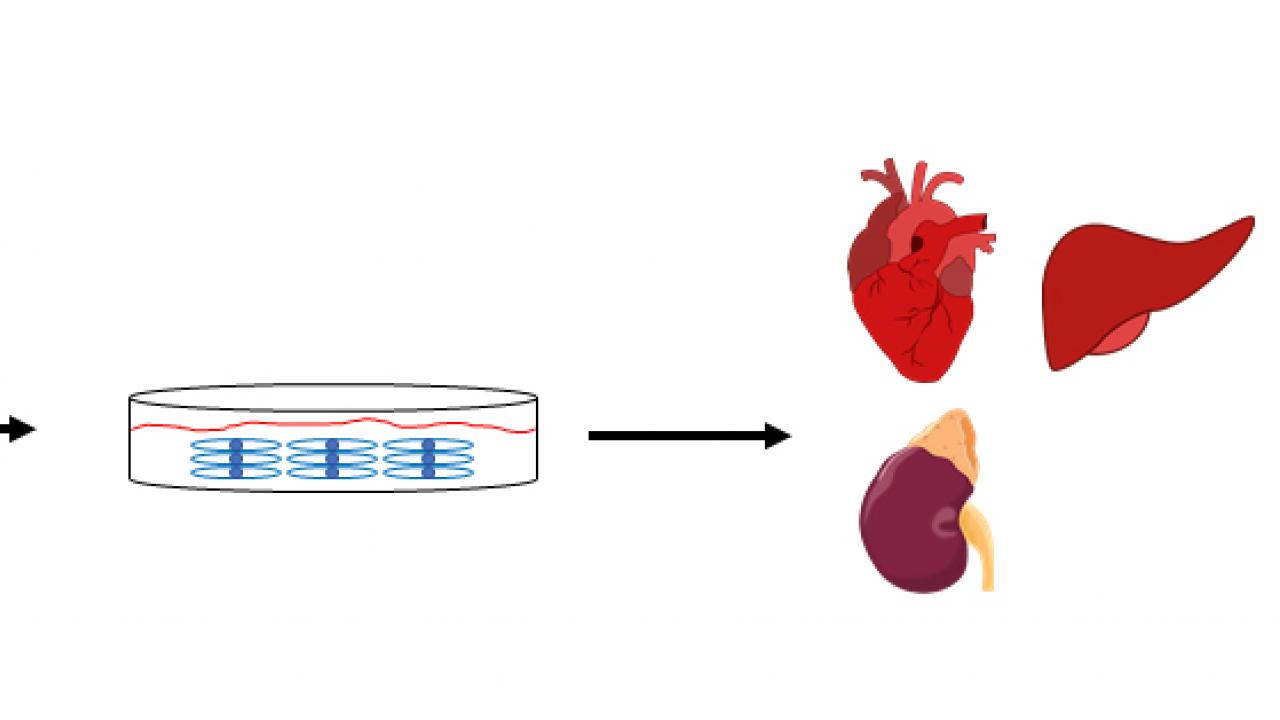 In the United States, the life expectancy has increased by ten years, from 69 to 79, between 1969 to 2015. The biggest contributors to this increase are from lifestyle changes (i.e. healthier diets and high physical activity) and increases in the quality of health care. Even during the COVID-19 pandemic, it is easy to take health for granted as it is uncommon to become severely ill from an infection, and that’s because of the advancements in health care. Some of these advancements in medicine include vaccines, novel surgical and imaging techniques, and developing therapeutics and pharmaceuticals.

However, with all the cutting-edge technology and knowledge in the present medical field, not all our problems have been solved. There are still major health issues that linger, such as cancer, diabetes, and non-healing chronic wounds. There are treatments for each of these conditions, but there is no definitive “cure”. For example, cancers in the central nervous system, such as a glioblastoma, doctors are not able to completely remove a growing tumor due to the sensitive nature of the brain or spinal cord. This would yield a possibility for the tumor to grow back, even with a rigorous treatment regimen (i.e. chemotherapy, radiation therapy). To find ways that can serve as a better treatment, or potentially, a cure, scientists and doctors have been examining the potential use of stem cell technology to tackle these serious medical conditions.

In this blog, I’ll cover the basics of stem cell technology, the techniques researchers are utilizing to advance the field, and the ethics concerned with using stem cells. I hope that this will expand your knowledge of stem cells and allow you to dismiss some of the misunderstandings regarding the use of this technology.

What are Stem Cells?

Stem cells are biology’s “Renaissance man”, meaning that they, quite literally, have the potential to become any type of cell in the body. Think of them as a blank slate, where to become a differentiated cell type, they must receive signals from their environment. Stem cells come from a variety of sources in the body. In adults, the biggest sources of stem cells are the blood, bone marrow, and fat tissues. These multipotent adult stem cells are called mesenchymal stem cells (MSCs). Another rich source of stem cells is a developing human embryo. However, ethical issues are brought up with the use of embryonic stem cells. There are arguments considering a human embryo as a living being. Therefore, the collection of embryonic stem cells results in the termination of the embryo, meaning the end of a life. In the past, this was a large ethical issue for scientists and researchers. However, in addition to the MSCs, there is another source of stem cells that can be derived from an adult human – induced pluripotent stem cells (iPSCs).

You may think that once a cell is differentiated, it cannot revert to a primordial form. Interestingly, iPSCs are adult cells that have been induced to become stem cells. A variety of adult cells can become iPSCs, including dermal fibroblasts, gingival cells, and periodontal ligament cells. Because of the use of iPSCs, scientists can drastically avoid the use of embryonic stem cells, thus avoiding ethical issues that are brought up.

How are Stem Cells Studied and Used in Medicine?

With the “blank slate” of stem cells, it is intuitive to see how they can be applied to regenerative medicine. Stem cells have an immense therapeutic potential in various diseases and conditions, such as diabetes, spinal cord injury/nerve damage, and chronic non-healing wounds. Doctors can use stem cells to help replace cells that have been damaged or lost from traumatic injuries or autoimmune diseases (i.e. lacerations, neuropathies, multiple sclerosis or Parkinson’s disease).

With the myriad of diseases that MSCs and iPSCs can be applied to, cutting-edge stem cell research is required to advance the field. How do scientists go about in investigating the efficacy of stem cells? Before clinical testing, scientists must prove the efficacy of stem cells in pre-clinical models. Usually, pre-clinical models involve the use of laboratory animal models for the testing of stem cells. Different types of animal models may be used, with the most common being murine (mouse) models. Reasons for using mouse models in research is that they age at a much faster rate when compared to humans. It takes roughly six weeks for a mouse to become sexually mature and are considered elderly when they reach one year of age. Other reasons are that mice express many of the same genes that are of interest in different human diseases, and that the financial costs of using mice are relatively low when compared to other animals. While murine models have been used to test stem cells in a variety of conditions, they are not exclusively used in biomedical research. Determining which animal model to use in research depends on how similar the animal model is to the human disease or condition. For instance, lambs are the preferred animals to model spina bifida. Of course, to prevent the inhumane use of animals in research, scientists must consult with the Institutional Animal Care and Use Committee (IACUC) and have their procedures approved before conducting experiments. The IACUC is usually made up of other scientists, veterinary staff, and other members with non-scientific interests (i.e. ethicist, lawyer, etc.). Issues that the IACUC and scientists address before beginning work include the exact procedures that are to be performed, adverse side effects, the need for anesthesia and analgesia (painkillers), and when to terminate the experiment. Once everything is approved by the IACUC, scientists can begin their work.

As mentioned earlier, the main purpose of using animal models is to provide fundamental evidence that the stem cells or compound under investigation have therapeutic potential in the disease being studied. It would be highly unethical for researchers to test stem cells in human patients before have any preliminary data showing the safety and efficacy of the stem cells first. In the worst-case scenario, this may also lead to major legal ramifications for researchers if the tested stem cells exacerbated the disease for the patients. Therefore, clinical trials for the use of novel therapeutics and stem cells in disease must be backed up with thorough preliminary studies before they can even begin.

With the stringent work done on stem cells in pre-clinical settings, what are the applications of stem cells in various diseases? In theory, stem cells can be used as a regenerative measure to replace damaged cells that are a result from different diseases. Recently, multiple sclerosis patients with impairments in the visual pathways exhibited improvements in visual acuity when they are intravenously treated with MSCs. In addition, iPSCs have a large potential for use in regenerative medicine. Recently, a group has found that b-islet cells can be generated from dermal fibroblasts of type I diabetes patients and can produce insulin in response to high levels of glucose. Other studies have shown the efficacy of iPSCs in other medical conditions such as myocardial infarction, Parkinson’s Disease, and retinal degeneration.

Another intriguing idea for the use of stem cells in modern medicine is the regeneration of complete organs. For a patient who has suffered organ failure, the most common method of treatment is for them to receive an organ transplant from a donor. However, there are several issues with the transplant. First, a patient must wait for a compatible donor to be available. This can take some time – too long, and the patient may suffer further complications or death. Second, the donor must be a close “match” to the patient. In other words, the immunological/antigenic markers expressed by the donor organ must be in close similarity to those of the patient. Otherwise, the patient’s immune system will rapidly mount a response against the donor organ, resulting in rejection. Third, even if the donor organ is a close match to the patient, the patient will have to be on immunosuppressive medications for the remainder of their life. While the immunosuppressive medications will help slow immune attacks against the donor organ, they increase the chances of being afflicted with opportunistic infections (i.e. pneumonia, Kaposi’s sarcoma, tuberculosis, etc.).

It is intuitive to see how stem cell-derived organs can circumvent the mentioned issues. In simple theory, scientists and doctors would extract stem cells from an adult patient and culture them under conditions that would induce the stem cells to generate the organ or tissue of interest. Recently, Japanese researchers were able to generate mouse-derived kidney tissue in rats. In this study, it was found that mouse-derived stem cells were able to readily contribute to the metaephric mesenchyme (embryonic structure that gives rise to the kidney) in kidney-deficient rats. The exciting findings from this study is a significant advance in the potential of using stem cells to generate human organs in medicine.

Even with the immense potential of using stem cells in organ regeneration, scientists and doctors must be careful in avoiding ethical issues in this topic. You may be familiar with the movie “The Island” that was done back in 2005. I won’t spoil the plot of the movie for you, but the narrative of that film touches upon the ethical issues of generating human organs as biological replacements for failed ones. While I am certain that we won’t do anything as egregious as what was done in the movie, we must be careful to not corrupt the therapeutic potential of using stem cells in organ regeneration.

I hope that I was able to provide you valuable information on the topic of stem cells and how they are being studied to advance the field of modern medicine. While the use of embryonic stem cells has been controversial in the past, scientists and doctors have found alternative types of stem cells that can the involvement of those cells. The use of animal models allows us to determine the therapeutic roles of stem cells before being put through the clinical trials that we see today. Versatile as they are, doctors and scientists can apply stem cells to a still-growing list of diseases and maladies. As research on stem cells continue, we may be approaching a future in which diabetes, cancer, and organ failure can be cured.

COVID-19 Vaccines: What is Being Developed?

Current Treatments and Trials Against COVID-19

Biotechnology: Leading the Search for a Cure for COVID-19