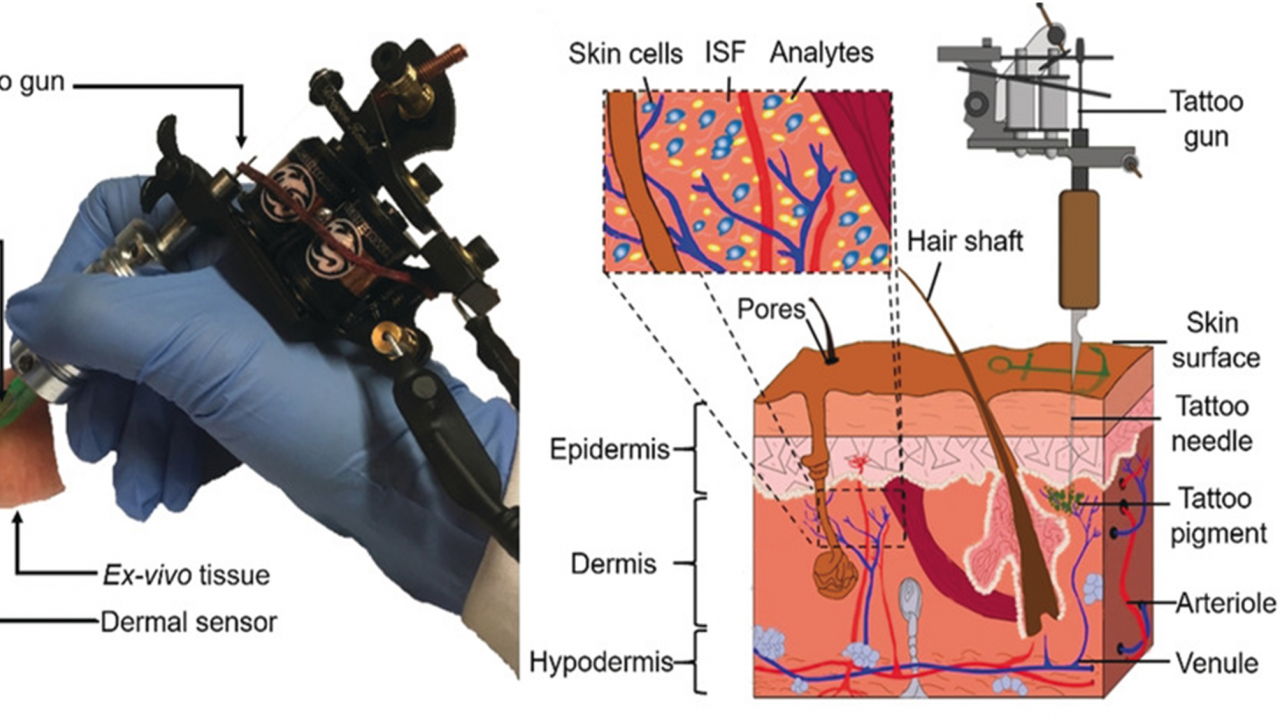 Permanent Tattoos as Biosensors: The Future of Health Monitoring?

Permanent Tattoos as Biosensors: The Future of Health Monitoring?

There is a growing need for wearable biosensors that can assist in at-home detection or screening for various diseases and disorders including acid-base homeostasis, diabetes, or liver failure. While various wearable medical devices have been developed to monitor circulating metabolites by measuring sweat levels, these tools can require maintenance and laboratory resources for quantitative readouts and can cause skin problems like dermatitis. One breakthrough diagnostic biosensor that has recently been developed uses a colorimetric tattoo that changes colors in response to alterations in the components of interstitial fluid beneath the skin. Researchers based out of Munich, Germany reported the development of the use of these colorimetric dyes in tattoo ink to visually display the concentration of specific circulating analytes in the body using a permanent tattoo as a readout. With a traditional tattoo gun, they injected the colorimetric dyes into skin from pigs (Figure 1, left), which is similar to human skin, to test whether the dyes would accurately quantify changes in analyte concentrations over time.

How do Biosensing Inks Work?

Like colorimetric assays used in the laboratory setting, this technique exploits the chemical properties of colored dyes that shift their appearance in response to changing conditions. Because the ink penetrates the skin and is exposed to interstitial fluid (Figure 1, right), the visual readouts of analyte concentration could be far superior to biosensors that aim to correlate sweat concentration to blood levels. In this study, the authors were exploring a proof of concept that biosensing tattoo inks could detect changes in pH, glucose concentrations, or albumin concentrations in the interstitial fluid. The dyes change color in response to analyte concentration because of the chemical characteristics of each specific dye. As you can see in Figure 2, the RGB color combination shifts as the value or concentration increases, allowing for a visual observation of these biochemical changes in real-time. The advantages of the use of this technology in humans could vastly improve early detection for serious diseases, reporting to primary healthcare providers, and accuracy in the timing of medications for disease management.

Combining Biosensing Inks into One Tattoo

When all three of these biosensing inks were combined into a multiplex tattoo, the results demonstrated a proof of concept that these biosensing inks could be used to provide a quantitative readout of biochemical changes in concentration beneath the skin. The authors suggest these data to be meaningful for colorimetric readouts in alkalosis, metabolic acidosis, hyperglycemia, hypoglycemia, hypoalbuminemia, and co‐developed hypoglycemia and respiratory alkalosis (Figure 3).

One additional concern with the use of permanent tattoos is how little is known about the ways that inks and dyes can alter the human body over time. While permanent tattoos have been a part of human culture for many years, there are many documented cases of toxicity or negative side effects from tattooing (ink allergy) or tattoo removal (absorbance of nanoparticles) that require further investigation. In addition, tattoo inks and permanent makeup are currently regulated by the Food and Drug Administration (FDA) as cosmetics, which does not require rigorous study into their safety profiles before use. In fact, it is common for them to wait for side effects to occur in humans before acting in many cases. According to the FDA website, “When we identify a safety problem associated with a cosmetic, including a tattoo ink, we investigate and take action, as appropriate, to prevent consumer illness or injury.” For these reasons, it is very important to select biosensing inks that have been demonstrated as safe for the human body if they will be used as a medical device.

Colorimetric tattoos may be promising as biosensors for at-home diagnosis of various conditions, but more work is needed to demonstrate that this technology will translate to human skin. In this study, only the pH sensor was shown to be reversible, while glucose and albumin sensing was not. The authors suggest that achieving reversibility for metrics beyond pH is feasible and suggest using advanced dyes or particles to reset these dermal sensors after activation for long-term use. Potential for additional improvement includes the use of microinjection to deliver the ink rather than needing a traditional tattoo gun, and a color calibration chart to control for variations in tattoo coloration or skin tone. Future studies should test the alternate methods of ink delivery and determine if the dyes and delivery methods are well-tolerated in human skin. 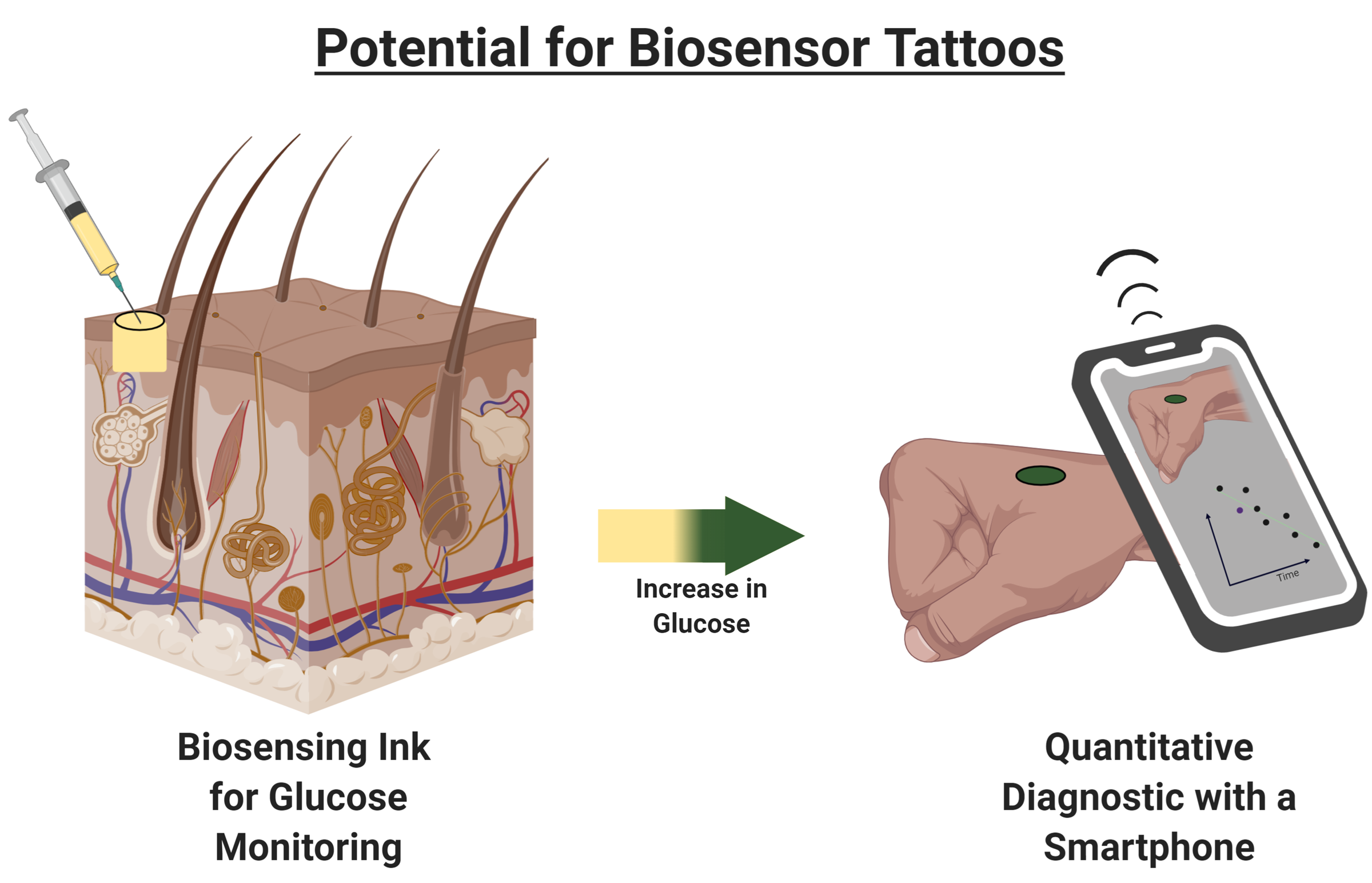 For a closer look at this research area, check out the Interactive Organisms Lab led by UC Davis Assistant Professor Katia Canepa Vega (Design), one of the authors of the cited publication, Yetisen, et. al (2019) Dermal Tattoo Biosensors for Colorimetric Metabolite Detection https://doi.org/10.1002/anie.201904416.

Moments That Make the Beat Go On: Part 2

Moments That Make the Beat Go On: Part I